My GREEN DHCP server is assigning IP addresses to my WI-FI devices, which then show up in the current dynamic leases section on the DHCP configuration page. The devices do not have to enter the WI-FI pass phase and can access the internet. So essentially, my GREEN network is currently wide open to all WI-FI devices.

I’ve setup RED, GREEN and BLUE and would like all WI-FI devices to connect only to BLUE and only after entering in the correct pass phase (i.e. The way it is supposed to work).

I originally thought that this issue might have occurred when I originally assigned one of my Gigabit Network adapters to Blue (as a placeholder) since my WI-FI card was not showing up (it was in the wrong slot). However, I since went back and assigned the WI-FI card to BLUE which now correctly shows up on the Main page and in the Zone configuration area.

I have not created any firewall rules which would open up GREEN. There are no errors in the console when booting up.

IPFire is running well except for three outstanding issues:

I tried, numerous steps to resolve this matter, including:

I’ve run out of ideas on how to resolve this. Any ideas why this happened and more importantly how I can fix it?

Strange. I also have this card in an APU2 but this is detected only as one wlan device. (This card not support 2.4 and 5 Ghz at the same time.) Looks like there is a wrong entry somewhere in the config. check /var/ipfire/ethernet/settings maybee you old card is still here.

My internet speed thru my WLE900VX card is clocking in around 220 Mbps. While this shows that my ac network is working, it is a far cry from the +600Mbps I see when not using the WLE900VX.

Have you cannected 3 Antennas ob both sides of the connection. If you have only 2 220 Mbps is a good speed. (A 54 Mbit adverted “G” wlan also get only 20Mbps in reality.)

Thanks for the reply. I have reinstalled IPFire. That seems to have resolved the GREEN DHCP server to WI-FI device issue. I can also now enable DHCP on BLUE.

Strange. I also have this card in an APU2 but this is detected only as one wlan device. … check /var/ipfire/ethernet/settings maybee you old card is still here.

After reinstalling IPFire, I still see wlan0 and wlan1. They both are showing as Native. Everything in the config file appears correct:

I have 3 antennas connected. Perhaps one of the antennas is not working or maybe my hostapd file is not optimized. Would it be possible for you to share your hostapd file for the WLE900VX card?

Speaking of the hostapd file, I notice that on the startup I see:
Starting ACPI daemon … [ OK ]
Starting hostapd …
Try to create additional AP device … [ OK ]

So the hostapd line does not return [ OK ], but doesn’t throw any error.
Also, when I shutdown or reboot IPFire, I receive a message that the hostapd is not running. However, I can access WLanAP and make changes. Is this normal?

Have you checked the syslog while try to start the hostapd.

This message is not normal for ATH10K cards. It’s only for an older card that has manually to put in Master mode.

Is there a firmware error or other message in /var/log/message?

Is there a firmware error or other message in /var/log/message?

Yes, there are errors, does any of the following help identify the issue?

Not sure if it will help, but here is some additional details…

Hi @arne_f , do you have any suggestions what I need to do with respect to the above error messages?

Have you already tried with core139. In this core we ship a new linux-firmware archive.

I have not tried core 139, ty for the suggestion.

Would it be possible for you to share your hostapd file for the WLE900VX card?

@arne_f Although I’ve updated to core 139 I’m still seeing error messages in /var/log/messages. What is error -2? Is this a return code with 2 meaning permission was denied? Any other suggestions?

error=-2 means “File not found” but it is normal for some files. The kernel first try to load a custom calibration firmware and after that a firmware with api 6 and if this fails it try api 5.

The last line in the log is suspicious. Have you configured the correct region in the WUI? Region 0x0 is not working for DFS at all.

Have you configured the correct region in the WUI? Region 0x0 is not working for DFS at all.

I think I have. I normally use CA, but I’ve also tried using US in the Country Code and with different channels. However, I receive the same region 0x0 not supported message. Please see the enclosed screenshot below (Passphrase removed for the purposes of the screenshot).

Could it be an issue with my HT / VHT Caps? I assuming that they are not correct as I have nothing in VHT and I’m using the HT Caps string from WLE600VX. I’ve asked here https://community.ipfire.org/t/hostapd-file-for-wle900vx/685 for help. 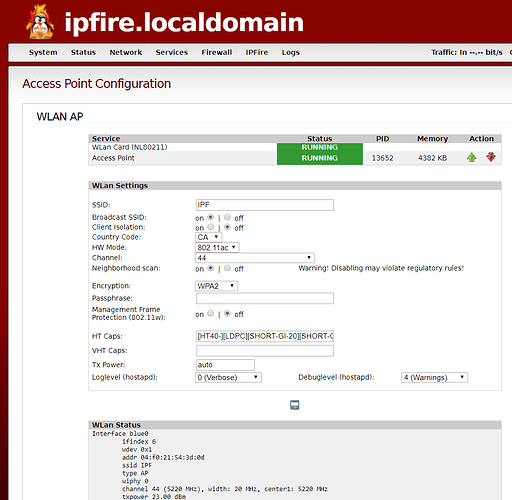 I also have the same errors in the log Summary therefore I am interested in any feedback about those.
Hardware - PCEngines APU2D4