we have 2 IPFire , both with VPN. A + B. Same network.
If the default GW of the Windows-PC, used for RDP, is the same that is used for incomming VPN everything is fine. VPN and GW for the PC are for example A. It works.

If the incoming VPN IPFire ist the other one, Now B, it fails. Until I give the PC a static, permanent route with the VPN-Subnet of the other, now used incoming VPN.

Where is my mistake?
Why do I have to set the Routes in the PCs?

Thank You in advance!

It does not work when I put the routes as static routes in both of the IPFire. The VPN Subnet of Ipfire as static route A in B and the other way round.

This is the right approach. You will need a static route on the incoming gateway pointing to some host on the network that can reach the other network; and you will need one on the default gateway of the Windows host to reach the VPN subnet.

You can use traceroute to see how far you are getting and if you need any firewall rules (if you are blocking everything by default, you do).

Thank You!
I still have the problem that a simple router works. IPFire does not.

On a simple router, FritzBox, I add two routes to two different IPFire OpenVPN subnets.
The windows clients get the Fritzbox as default gateway. Traceroute from the client shows erverything is fine. Each OpenVpn subnet is reachable. Traceroute goes the right way: to the FritzBox as hop 1, than to the IPFire it should go. To the one or the other.

Now I set an IPFire as gateway. I add the route to the other IPFire VPN in the one I use now as GW for the Clients.
The client reaches the OpenVpn subnet in this IPFire, now used as GW.
But the other OpenVpn subnet is not reachable via Ping and TraceRoute.
The IPFire does not route like the “simple router”.
Tracert shows that, instead of routing it to the other IPFire in the same net, as it is registered as route in the IPFire via Network/Static Routes , the way goes out to the GW of the IPFire–> Internet

This is no deny or reject. It is simply not right.
I read that I am not alone with this problem. (simple router works, ipFire blocks)

I have many such setups and they work without issue I typically do two settings:

Thank You.
Yes, the way you wrote is the way it works here too.
I just wonder why it doesn`t work the other way and if this is a bug or not.

As far as I know now the routes in the IPFire are routes for the IPFire. They are not “public”. They are not used for routing incoming packets. That seems strange to me.

I find it hard to understand your topology

has each IPfire got a separate static wan from the fritz… 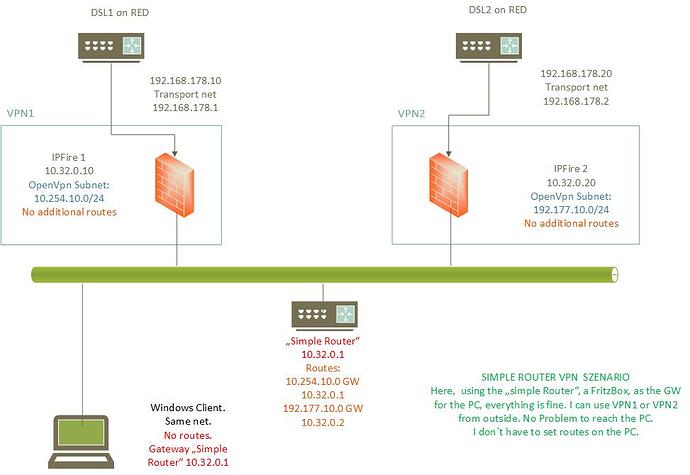 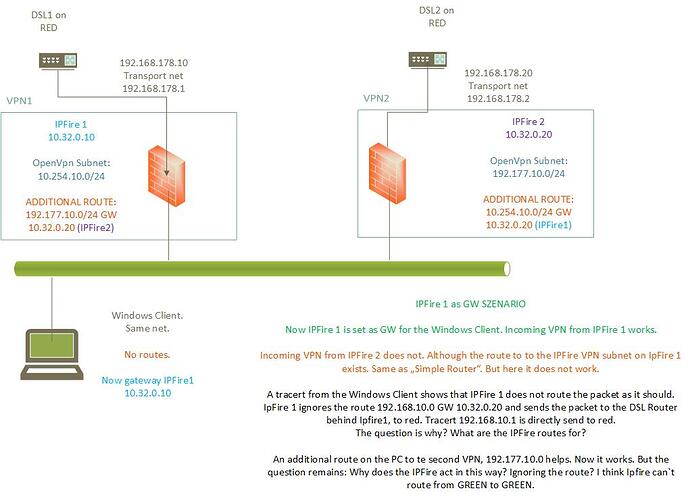 Yes this is exactly as I would expect and have understood in the past , indeed the internal static routes are for IPfire purposes .
Agreedt would be useful when a packet is destined for the other ipfire the (Ipfire’s) static route would deal with it.