Segregate one VLAN from rest of network

I now need to add a work firewall device to my home network, which will tunnel to my office network behind the scenes.

The plan was to create a separate VLAN on the swtich for this traffic, and put it on a separate subnet using the Blue zone. Home traffic would all traverse over NIC2 Green (192.168.1.0), work traffic would traverse over NIC2 Blue (192.168.2.0), and the two would not be able to interact. After going through the forums, I’m seeing lots of people struggling with VLAN traffic when they have fewer NICs than zones, and I have a similar question.

Can this be done with IPFire and 2 NICs?

My current setup: Comcast internet connected to red interface of IPFire. Green interface connected to port 1 of 48-port Cisco 2960S. Two Ruckus APs connected to the Cisco on ports 11 and 12. These three ports are configured for VLAN trunking. I’ve been running my entire network on Vlan 1 (untagged) with great success thus far. I would like to setup a guest network on the Ruckus APs using Vlan 100. I have done so in the Ruckus interface. I can connect to the guest SSID. It will disconnect shortly…

Thanks for the quick reply!

Here’s my initial setup, but not having any luck yet. My first assumption would be to set the blue zone to VLAN 2 (My work network VLAN) on same same NIC as the Green zone, since they’re physically on the same NIC. I’ve also disabled the Blue zone MAC filtering with a rule. So far I’m not getting any connection from any device on that VLAN though: 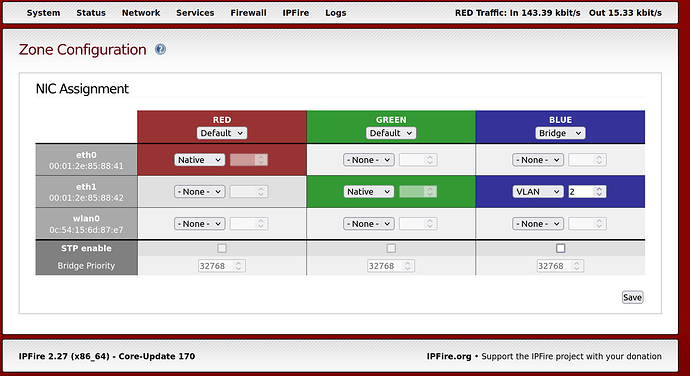 A followup question as well. Once I can get devices connecting on Blue (which I’m still not sure what this issue is there), will DHCP pick them up even though Blue has a different subnet defined, or will they need to be static IPs?