Is there a way to include more Blocklists? From a reputable source like Github, Gitlab etc… and are well maintained? 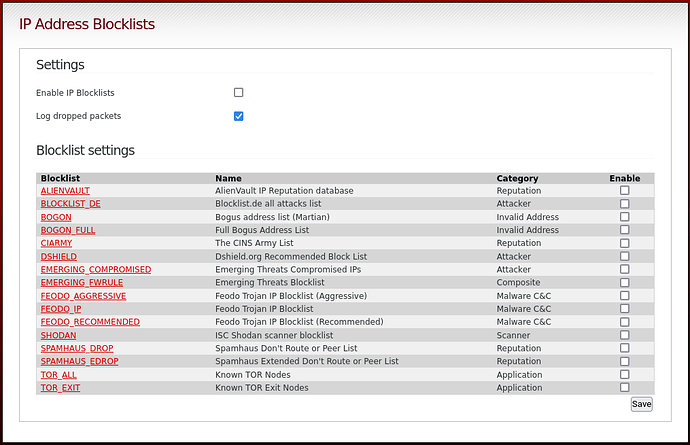 HAHAHA, no I am not complaining, just I like to use blocklists to block services like DoH …

Is there something specific that you had in mind? (something reputable and well maintained?) I am just curious…

The file containing the list of blocklists is /var/ipfire/ipblocklist/sources. The explanation of the fields in the file is in the file header, so it’s easy enough to add new entries if you want, however the file will be overwritten by any future updates.

If you find any lists which would be useful to other people you could submit a patch to update this file, but before doing this it’s important to check that you’ve got the maximum frequency of checking for updates right, as many lists will block anyone trying to update too often. If you’re going to submit a patch it’s also important to check that the licence for the lists allows the list to be included in the ipfire distribution.

Possibly in a future update we can allow the possibility of a sources.local file, but I think the feature needs to be left as it is for a while before adding new functionality.

Many thanks for your detailed explanation, I will follow it and post some lists below for discussion before submitting it.

Interesting that Abuse.ch went or is going commercial very soon. so it makes sense to have option.
@jon There used to be plenty of open and well maintained lists, but they either went commercial or abandoned. But here are some I recently found and used in addition to the ones already in the addon:

1- This list contains Common DoH servers and I think it is useful in cases when clients are circumventing IPFire’s DNS server.
It doesn’t mention a Licence. In terms of update checks I think Github is pretty forgiving for update checks if done in a “random” pattern or intervals.

2- 3CoreSec Blacklist - they share threats from their honeypot projects
https://blacklist.3coresec.net/lists/all.txt

The "ALL list "above is combined from these specific lists