I understand there is no WUI for the NUT addon.

I am having trouble monitoring my Cyberpower UPS. It is straight forward, USB A to B cable connects CyberPower → IPfire.

The driver is working fine,
monitoring is not working

FWIW, I’m using the apcupsd addon with a CyberPower UPS. It works fine for me.

Thank you for your reply, I did try it, and was not working,

I guess I will give it another try,
Do I need to get rid of the NUT files before?

apcupsd addon is Not working for me

Is it normal for WUI-Status-Services
to show NUT and APCUPSD to be “STOPPED” ?
If I click the green arrow, to start the service, nothing changes,
both will stay “STOPPED”

I found a typo in the apcupsd.conf
so its running but can’t read any data

Only one of them should be running at a time otherwise you will have two systems both trying to access the UPS at the same time.

If you are trying to evaluate apcupsd then I would uninstall nut. nut does a backup when being installed so if you re-install again leter then your conf file should be restored.

Looking in my apcupsd.conf file I have DEVICE uncommented. The conf file says that for usb ups’s a blank DEVICE setting enables autodetection.

The rest of your conf settings look the same as mine (different ups but still usb based) and it is connected without issue.

Thank you Adolf, will try that.

I uncommented and left it blank

As a quick check if you run lsusb does the list of usb connections include your Cyberpower UPS? My APC UPS is shown when I do that.

Searching around I found another person having similar trouble as you. In the end he said that it was fixed after he fully switched off the UPS, including disconnecting it from the mains. Then when he started everything back up again his UPS usb connection was working again.

I will try shutting it off,and disconnecting completely when I get a chance one of the week-ends.

I just added the USB cable from my IPFire device to my existing Cyber Power CP1500PFCLCD. And here are the changes I made to apcupsd.conf:

These are the only changes I made to the default apcupsd.conf file. And it seems to work OK for me. I have not tested this yet (no test button and no test power down).

EDIT: Here is the screen I see in menu IPFire > APC-UPS status 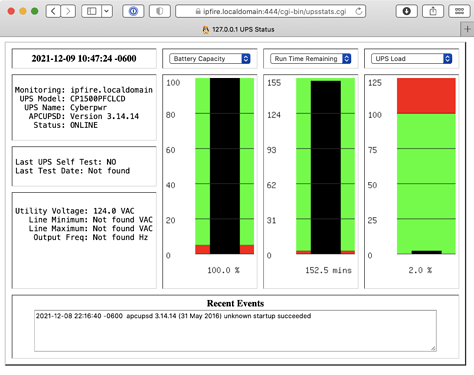 I changed the apcupsd.conf to match yours and restarted ApcUpsd but it still says “Communications with UPS lost.”

Thank you for trying

I was able to shutdown the firewall and disconnected Cyberpower from the mains,

I wish, in the future, I could figure out how to make it gracefully shutdown devices,
right now the Cyberpower is 200 minutes strong, so it outlasted any power outages but eventually, it won’t.

I wish, in the future, I could figure out how to make it gracefully shutdown devices,
right now the Cyberpower is 200 minutes strong, so it outlasted any power outages but eventually, it won’t.

I think the timer for the shutdown is somewhere in this section below. (I have not set mine up yet).

And I think the graceful shutdown comes from other software installed on the other devices. The UPS broadcasts a shutdown notice and devices react.

And I think the graceful shutdown comes from other software installed on the other devices. The UPS broadcasts a shutdown notice and devices react.

What software is there for example for IPFire router to gracefully shutdown?

What software is there for example for IPFire router to gracefully shutdown?

from reading the config file options I got the impression the IPFire box is shutdown by the apcupsd add-on.

If during a power failure, the UPS has run on batteries for TIMEOUT
many seconds or longer, apcupsd will initiate a system shutdown.