after a recenty upgrade to core 144, I noticed that there are already some Python version installed, as can bee seen in the hardcopy below.

I’m mainly using Python 3, to be exactly Python 3.8.x. Is there a chance to remove old versions from the current installation? FWIW: Pakfire does not offer this.

I’ve installed various Python3 libraries from within Pakfire before updating to core 144. Hence, I guess this invoked installing the Python3.6 interpreter, too. 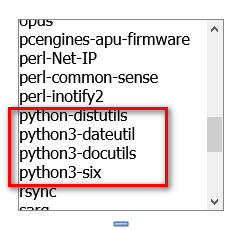 After the core update the interpreter obviously got updated to version 3.8, which is fine of course, however, I cannot uninstall the already available libraries, because I guess I will loose Python 3.8, too, which I need of course for various scripts.

So still the question left, how to get rid of Python 3.6?

and if that looks okay, then

Yes, those and even more:

and if that looks okay, then

please do not do this.

Some of those add-ons need an update indeed, and unfortunately, there usually is
little time for maintaining all of these. Instead of messing around with the system
(which probably is going to work, but I have no idea about possible side effects),
fixing those issue by becoming engaged in development would be a more sustainable way.

Looking forward to see you at the development mailinglist.

please do not do this.

Did try this already but using command
find / -type f -name ‘py*3.6*’ -print
This did not find any occurrences but resulted in an errror while accessing a specific folder anyway.

Unfortunately, I’m just a user of Python and not a very skilled one (still learning), hence I won’t be of any help on any development mailing, for the purpose of resolving this “issue”.

I even don’t know which version IPFire installs in a fresh installation, my guess is 2.7 and 3.6. I assume that the update to core 144 now added Python 3.8.2, at least this is what the command python3 reveals.

I wouldn’t have noticed this if I hadn’t used some hard coded paths in some of my cron jobs that pointed to a Python version 3.6 which denied working after upgrade to core 144 because of now missing Python libraries.