We use Windows Server 2012/2016/2019 in our environment.
Some of those servers are NOT in Active Directory.
We would like to include them into AD
and install a Linux server playing the role of AD domain controller.

By using IPFire, we try to combine AD domain controller, firewall and VPN sever into one server.

Is this possible?
If yes, how to do it?
Thanks.

Welcome to the IPFire community 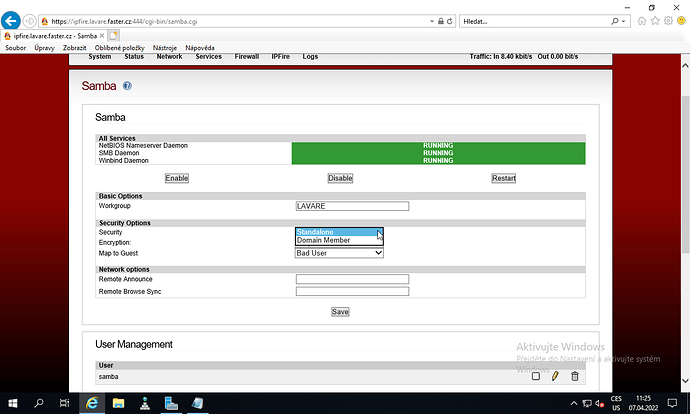 Okay, had a search through the IPFire blog and found that in Core Update 152 (July 2020) Samba was updated from Samba 3 to Samba 4 and at the same time some aspects of Samba were removed due to lack of use. Using Samba on IPFire as a Primary Domain Controller for Windows NT domains was one of them.

So I am sorry but you will not be able to use Samba on IPFire as a Domain Controller.

The wiki needs to be updated to remove that whole section about Primary Domain Controller.

So I am sorry but you will not be able to use Samba on IPFire as a Domain Controller.

indeed, I vaguely recall this decision back then.

Samba is a very powerful and versatile beast, and to the best of my knowledge, nobody in the core developer team really uses it (though we do have some users running Samba against their AD), so it was a bit difficult to keep track on all the functionality it provided over time.

Generally, domain controllers are so sensitive that they should not run as an additional service on a firewall, since that greatly increases the attack surface. Please consider running the domain controller on a dedidcated machine, and have robust firewall and IPS configurations in place.

but i read samba have disabled option ,sharing with windows

What has been removed is the usage of Samba as a Domain Controller for Windows computers.
File sharing via Samba shares is still able to be done.
https://wiki.ipfire.org/addons/samba/config#create-a-samba-share

So you can still have a samba share defined to hold the pxe boot files that are required and you can install a tftpd server to support the booting via pxe. The wiki page describes an example with Suse using an nfs server share. You would need to change this to using a samba share.
https://wiki.ipfire.org/addons/tftpd

More details than are in the samba or tftpd wiki pages I can’t help with as I don’t use either of those addons myself.

Yes, I agree with Peter.
Not a good idea and you wont necessarily have all the right bits to do it anyhow.
The active directory function will require Kerberos libs which may not be present.
If you are to build a server best to go with a debian distrubution as this will make the seup a lot easier.
Redhat versions will not include all that is necessary in their packages and you will have to build the samba packages by hand. Not for the faint hearted.
In order to align your sids/uid’s you will need to pay close attention to the idmaps.

check here for a good write up:-

Create an Active Directory Infrastructure with Samba4 on Ubuntu - Part 1

This tutorial will explain all the steps you need to take care off in order to install and configure Samba4 as a Domain Controller on Ubuntu 16.04 and 14.04.