As Bernhard mentioned in an adjacent thread, I have 2 adjacent logical networks on Green, as you can see in the image. I am now toying around with PiHole.

I took a Raspberry Pi 4b, installed Rasbian latest revision on it, installed PiHole through scripts provided on their website and assigned it to a static IP address in my 172.x.x.165/32 network with the Green Interface 172.x.x.1 being the gateway, and plugged it into the switch just above the red box on the right in the below image. 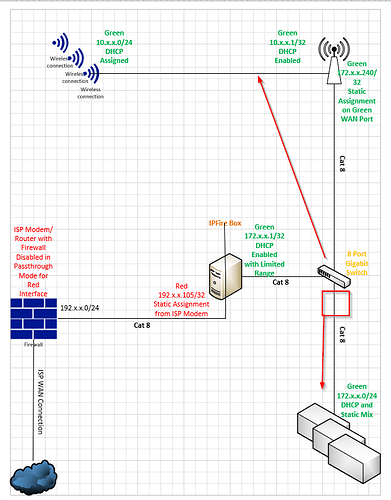 Here is the trippy thing. I can get to PiHole from any computer in the 172.x.x.0/24 network, at its Web UI http://ip/admin and it loads, browses and acts absolutely normal. Fully functional might I add… except for 1 thing.

When I jump on any other computer in my logical 10.x.x.0/24 network segment, I can’t hit it with SSH, ICMP, HTTP or anything else successfully.

Now to address that piece. I run tcpdump -XXnni any on the IPFire SSH and I can see inbound traffic heading to the PiHole. I then jump to SSH on PiHole at 172.x.x.165 and I can see the traffic arriving…however the return traffic never crosses IPFire on the way back across the network segment. I can say I have a ton of traffic crossing that segment successfully, but apparently I am missing something basic here. I have been about 8 straight hours with hands on keyboard, ssh, and pondering wth may be going on with this.

The Options in the IPFire firewall can be confusing.

Since my logical network on Wifi is upstream from my switch, I assume something may be getting blocked on its way back to its origin, but I had thought requested traffic from point A to B, if it makes it, would be stateful on the way back.

I can also say that IPFire, even though logically I am still on the Green Network, I am not fully in Green or my entry upstream wouldn’t be black in the color scheme. Not sure on that one, but thought I would mention it.

As only an example of color scheme, this is what happens when I add my 10.x.x.x network segment in, although technically logical.

Without a exact description of your setup and configuration ( all devices: IPFire, AP, Raspberry, switch ) it is difficult, to help you really.

I’m going to take a guess and say you’re using pi-hole on 172.X.X.240 to run the 10.x.x.x subnet. I think that would mean you’d have to write some routing rules on the pi-hole, and I don’t know if pi-hole can do that.

This keeps all devices in one green subnet. The only Firewall or Static route rule I need is to get to the WAN facing Fritzbox, I think.

I do this because I use a proxy forward to my commercial VPN service, so no devices need a VPN client, just an automatic detection (WPAD) or a manual entry to the IPFire if WPAD doesn’t work to the IPFire web proxy. This rig works well for what I do. Pi-hole stops a lot of ads, and having the VPN in the web proxy is great. My VPN service has a recommended server picker, so I run that and plug the recommended address into the proxy. Any device then (I have Linux, Android, Mac and Windows) goes seamlessly and without a local client through the VPN.

The second Fritzbox makes WIFI on the green LAN easy to integrate. You could always run a blue on IPFire or turn guest access on the Fritzbox if you wanted WIFI with no LAN access.

Why did you set it up like this? There is no real security benefit if everything is connected to GREEN anyway. Instead, you end up with cascaded NATs which is generally a bad idea.
I’d suggest you disable the second DHCP and merge everything into one network managed by IPFire.

You correct. There is no security benefit to me segregating 2 logical networks the way I have done it. I wasn’t aiming at security for that setup, but I did it that way so I could chainlink my wifi and physical networks on Green. Eventually, I will potentially move Wifi to Blue, but that is for another day. Just saying, if security was my focus there, I would have introduced another inline Device between the switch and the WiFi access point. LOL

From any computer on Wireless, I can not fully reach PiHole.
I have done linear packet captures on IPFire, Wireless Clients, and IPFire watching the flow of traffic.

The WiFi AP has all Firewalling Disabled, and there is a Routing Table in Place 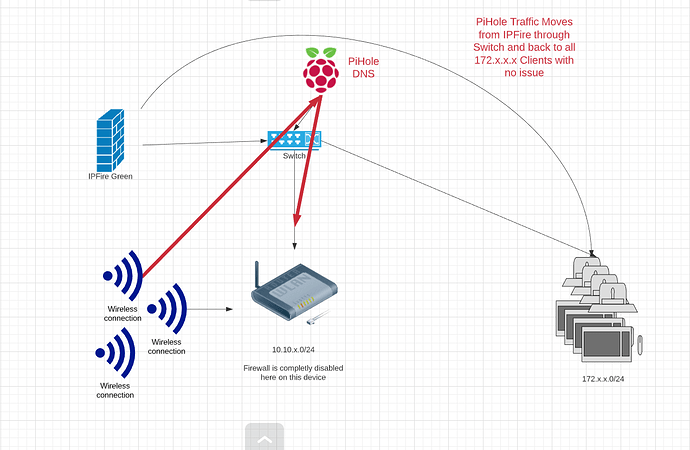 I understanding IPFire is supposed to be a stateful firewall, to return traffic to the destination. I am further trying to figure out how to get a packet capture at the Ingress of the WiFi Router. Unfortunally, the vendor is currently closed and there is no documentation eluding to how this would be done. Although I can get SSH access into the device, it doesn’t appear that the developer added something as basic as tcpdump to the binaries. uggg…

Your traffic description shows the traffic PiHole --> WLAN is blocked by the AP.
This isn’t a problem of IPFire.

We don’t know yet. That assumes it is leaving the IPFire Egress. I have yet to determine if the traffic is on the wire at the ingress of the WiFi AP on return traffic.

there is a Routing Table in Place

Where exactly? Have you tried setting routes to the 10.x.x.0 network on your Raspberry or IPFire?
I think this is a routing problem, not a firewall issue. Edit: At least not in the IPFire side, it shouldn’t be involved in the WLAN -> Raspberry connection at all.

If carefully examined in my previous entry you will see details of what you noted. If there was a routing table issue, I wouldnt see traffic coming back out of IPFire in tcpdumps destined for the WiFi. I have a ton of connections destined for WiFi and they all work so IPfire is clearly aware of that network. I still am pending verification of my AP tcpdump. I will eve eventually get thst piece checked… heck, Bernhard may be right, but then again its all theory right now until I get that piece proved out.

Bernhard, is there a wiki page showing the Order of Operations for IPFire, so I can follow the packets through the device?

If the pictures of your installation are right, and interpreted right by me, Leo’s statement is right also. The communication between PiHole and wireless clients should flow in the green LAN ( I suppose ethernet ) only, without using IPFire. The switch in green distributes the packets to the appropriate attached devices (directly).
If this asumption doesn’t hold, your system is installed/configured other than you described/think.

It took some magic to get tcpdump installed on my Wifi Router, which is logically in line on the Green network.

I captured all traffic and found “in-fact” that traffic is not making it back from IPFire. 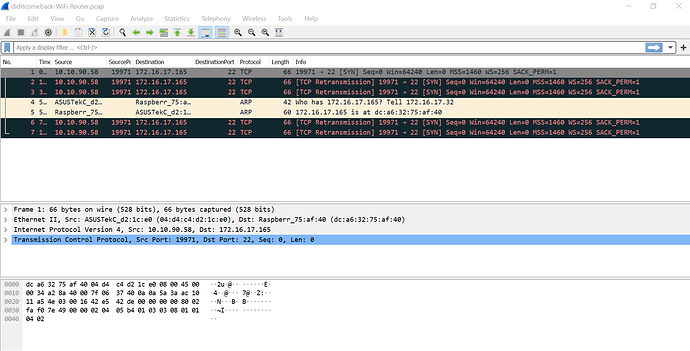 As we follow the traffic back upstream, we can see it hits the IPFire Interface, so we know it arrived, and is trying to communicate back toward the WiFi Router. Again, the traffic return shows a SYN/ACK, but never makes it from IPFire through a dumb Gigabit switch to the WiFi Router. 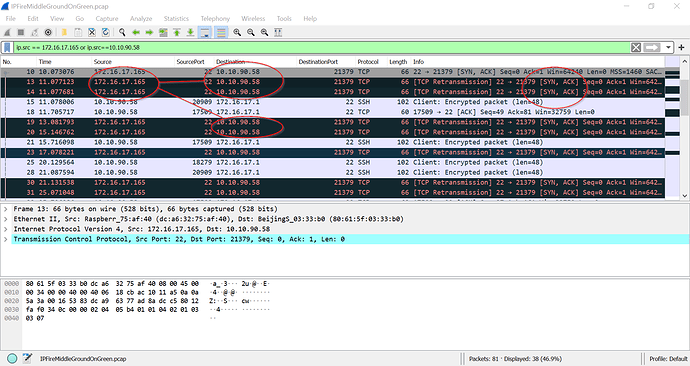 It was previously suggested that it could have been a PAT or NAT issue on my Wifi Router, however I wanted to get you these screenshots so you could see for yourself that I wasn’t kidding. It is not a PAT or a NAT issue on the WiFi and has to be a problem with some type of configuration on the IPFire device, otherwise there would be an arrival of return traffic of at least a SYN/ACK from the return source of 172.16.17.165 (PiHole). I do this type of thing every day, so I am sure its not the problem that it was believed to be, but that does not rule out IPFire’s configuration.

The Cat 8 Cable is 8 foot long. If I need to get a 2 of my 4 foot cables and splice another dumb switch half way in, I can do that too.

Bernard, if it doesn’t make it back to the AP leaving the IPFire, how can it then make a decision of where to route it. LOL… Do you see what I am saying?

I think i know where the confusion is coming from…

The Gigabit switch is a L2 MAC driven device. While it is true that both the Access point and the PiHole are hanging off the same switch, I am also moving from. 10.10.90.0/24 172.16.17.0/24. L2 dumb switches can not make L3 decisions. The traffic gets passed to the green interface because it has to make the decision on where the L3 PiHole is, then the same in reverse. As you can see from packet captures, Traffic fully transverses from wifi client all the way through the network passing through green in route to 172… once there, back through the network it goes arrives at IPFire and then attempts the next connection but never arrives at the WiFi router over cat 8. This means that either I am missing a routing table rule that is vital or something else is stopping it at IPFire.

I checked IPS logs, Firewall Logs, and do not see anything being dropped, although I feel its there on IPFire. Has to be… if it arrives at IPFire on the reverse trip looking for the final ACK from 10.10.90.0/24 and never arrives at the other end of the 8 foot cat 8 cable. That should bring you to the same conclusion.

I will grab my routing table shortly.

Why should the traffic go through IPFire?
IPFire, PiHole, AP are all devices on green network, connected through the switch.

Well I certainly found 1 problem… I already had an entry in IPFire pointing 10.10.90.0/24 to the assigned WAN port on the internal WiFi Router of 172.16.17.32, but dang weird its not showing up within the Kernel Routing Table itself on IPFire. 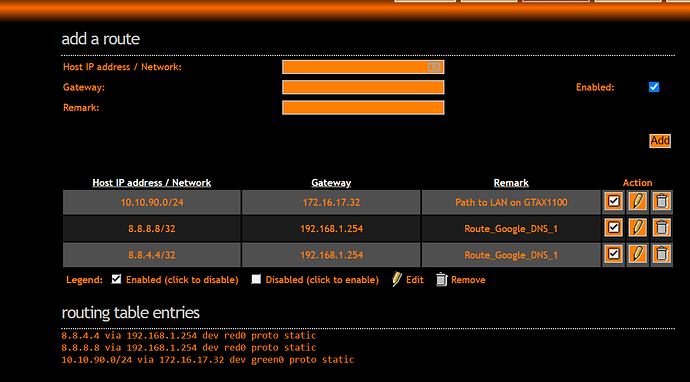 Apparently, I am not the only person who’s ran into this missing entry…
and based on the posting date below by

The programs included with the Debian GNU/Linux system are free software;
the exact distribution terms for each program are described in the
individual files in /usr/share/doc/*/copyright. 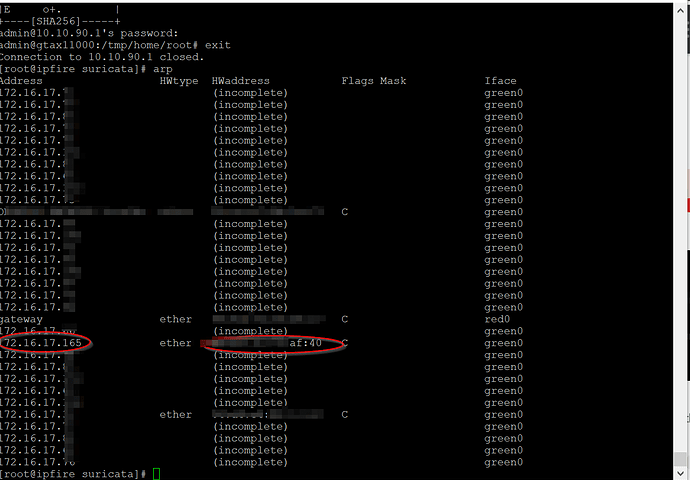 Maybe this is why I am having a problem. Who knows. Maybe the dumb Non-Configurable Gigabit switch is reallly really dumb. LOL… I guess its possible?

Also, this could be the information you are looking for?

Why do switches need ARP tables when the translation are done on the machines side?

This is a pretty common misconception or more specifically, a terminology problem. In a layer two switch, there is not an ARP table, only a forwarding table. The switch records each src MAC address it sees inbound in the forwarding table, and attributes it to the port so frames with a dst MAC will only get sent to the port known for that MAC. Many people call this an “arp table” or “arp cache” even though it is neither.

To make it clear once more.
I do not have your problems. And yes, I know how network traffic flows and is managed.
Your configuration uses three networks:

Physically ( on ethernet layer ) the devices in green are connected by a switch.