Iphone11 got in the inside network

The issue:
My wife bought an iphone11pro and connected it to home wifi, outside the ipfire firewall. At the same time I was(by chance) looking at the ipfire DHCP server and it listed a machine with hostname iphone_***** with ip address and mac listed, immediately I asked my wife to check the mac address of the phone and it matched exactly to the one on ipfire inside network.

Question:
How did the iphone get on the inside network, this makes no sense at all.

Annexing pics from ipfire and iphone 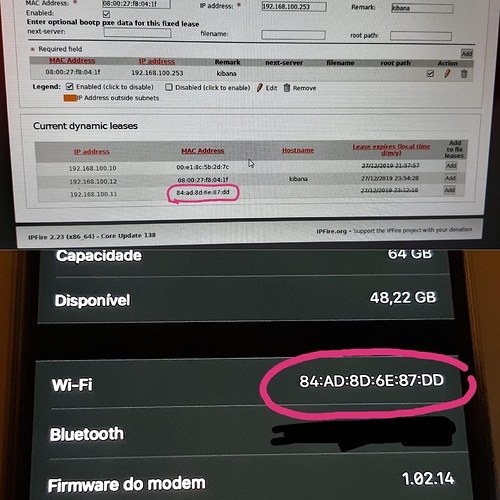 I don’t think that is an ipfire problem. DHCP server from green never send any leases into red network. I would say check your virtual box configuration.

Unlikely, bridge and host-only have no possible connection between them beside the ipfire, and the network configuration of VBox is pretty straight forward. Right now I’m also considering win10 because it’s the only other available path between both networks.

Have you configured blue?
If 192.168.100.11 is a green address and kibana is your WIN10 computer attached to the LAN, then I would suppose your virtual machine as leak, also.

No blue interface. Kibana is virtualized on VBox and has only one interface which is connected to host-only. Yes I’m also considering win10