The setup worked as expected and finished with the message that’s done. But when it was supposed to restart the machine I got this and the setup crashed. 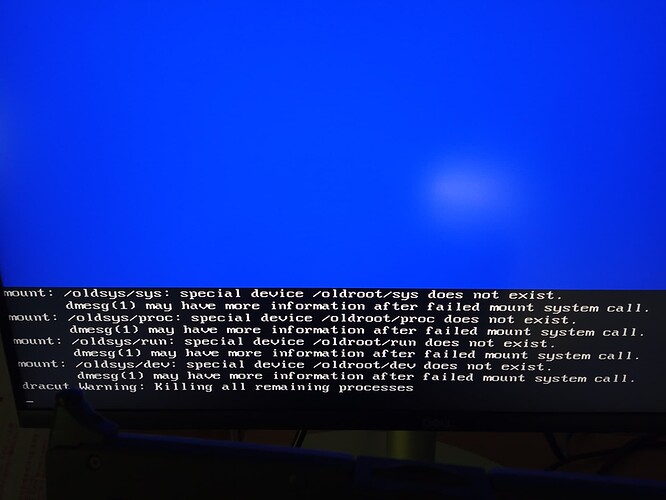 Edit: I don’t think anymore that the system really froze.

After the first boot and finish od the setup I wanted to shut down the machine. However it never turned off. As I can still write things in the console the machine is still alive. 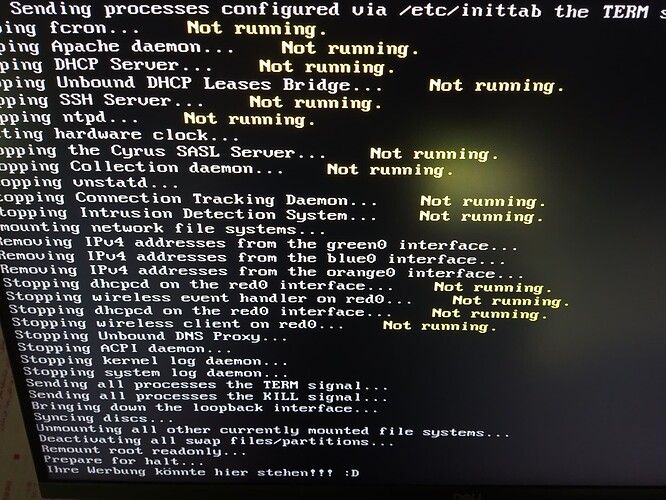 Hello,
what hardware did you install on?
Have you checked the operating system with which it starts in the bios?
I find the same behavior if in the bios of the cards I use, I don’t set “linux” as SO.

I know what you’re talking about. The BIOS has no such option. The board is supposed to be supported with kernel 5.10. IPfire has 5.15 now.

The build is new: MiTAC Thin Mini-ITX Board PD10EHI

I wanted to try Manjaro, default USB boot also LTS 5.15, but I don’t get a screen. I will try Ubuntu in a few minutes when the usb drive is ready.

I finally booted Manjaro and Ubuntu and both don’t turn off the computer as well. So it’s not related to ipfire. I’ll contact Mitac to solve the problem.

um, with regards to the last line displayed in the second picture in this post of yours, something is seriously wrong here: The last line - “Ihre Werbung könnte hier stehen!!!” - translates into “your advertisement could be displayed here”.

To be honest, I have absolutely no idea where this line is coming from. Grepping through the IPFire source code, these words appear nowhere (I really would have frowned upon such an easter egg anyway). So, while it is not clear which component is causing this, something is truly wrong…

The last line was my input to prove that the input still works and the system hasn’t crashed.

Actually I mostly wondered about the first screenshot with it’s error messages. The second problem - system can’t halt - is mostly known an ACPI issue. I’ve contacted the manufacturer to solve that bios problem. The system is supposed to run linux since kernel 5.10 and it’s not 100%. I can’t even reboot the system.

I saw the same error when Installing IPFire…

This MAY (the key word is may) have been when I booted the USB drive and from I did a regular install versus a Serial Console install.

It did not boot for me either.

I am desperately trying to find my notes because my personal memory sux!

I wasn’t able to find any additional info to help.

I can see the same message twice (on two different days). But I don’t remember the “why”.

It might help to publish the your entire log from initial boot on the USB drive to error.

This messages came up after I installed ipfire on a new device via a usb pen drive. Because there is a ACPI problem with the BIOS, the device didn’t restart and I was able to see that messages. I would like somebody to check the code at the end of the installation procedure. There are 4 mount calls. The setup create 4 partitions. I guess these calls should unmount these partitions but the calls/codes are wrong.