How to backup addons

If you have addons that do a backup then you should have an Addons section on the backup page as shown in the wiki page. To the right of each addon line are three icons

The right hand icon does the backup for that addon.

… and here starts my problem againb Ages ago I’ve suggested to change those icons since they are not really self-explaining or distinguishable.

Maybe someday someone does the job?

If you put your mouse over the icon it tells you what it does.
In the wiki it also tells you at the end of the backup page.

If you have addons that do a backup…

That must be my problem, I guess none of my addons “do a backup”.

I believe it would be useful if there was a way to at least backup the list of addons that are installed so I don’t have to guess when my firewall dies and I have to build a new one.

I have a 3D printer that is connected to an RPi running OctoPi / OctoPrint. Their backup records the list of plugins that have been installed and then reinstalls them when you do a restore. This would be the model I’d like to see implemented in IPFire.

The backup program as coded only backs up things like configuration files etc that the person who originally submitted the addon identified as worth backing up.

Anyone can submit a patch to add a backup definition to an addon. I recently did it for the apcupsd addon which was not backing up the conf file folder. As of Core Update 154 it is now backing up all the conf and control files.

To change the backup to be able to re-install all the addons is not an insignificant job. Someone would need to stand up and be willing to do the development work on the code.
The core dev team is very small and is heavily loaded with dealing with bugs and developments around the core aspects of IPFire.
If someone cannot be found who is capable of and willing to work on developing the backup code it probably won’t be done.

I just had a quick look and getting a list of installed addons saved in a file in the same directory as the backups should be relatively straightforward. I will have a go at doing that and submitting a patch.

The bigger job of getting IPFire to install all addons as part of a restore is beyond my capabilities.

That is a great first step. Having the list saved in the system backup would be even better. Perhaps we need an addon that has that list as its configuration data?

I think I only had one addon, sendEmail, that had configuration info that should have been saved. I’d be happy to put some effort into creating a patch for that if I got some guidance.

If we can get the backup / identification part working, I think the restore part is less important for now.

Here’s a quick-and-dirty script I use:

Hmmm… my formatting skills are weak, but I think you get the idea.

Not sure if this helps…

Here are my two addons that will be backed-up:

Each file includes a list of files for backup.

FYI - I don’t recommend adding your own files manually. I don’t know what might happen…

I’m posting this to leave some cookie crumbs for others… not to disparage your knowledge.

If the /var/ipfire/backup/addons/includes/* exist after addon installation, it’d be risky to modify them, as you’d have to reinstate mods after an upgrade. It’d be best to file a bug report and ask for additions. Ditto on bug report if an addon SHOULD have a backup, but doesn’t.

The addon backup results (*.ipf) are TAR files… I’ve played with them in the past, to decipher what was being saved and make comparisons after munged reconfigurations.

please open a bug report for this in Bugzilla, . Your credentials for this community work there as well. For information on how to do this please read blog.ipfire.org - How to write a good bug report? .

Reasons:
A lot of Core Developers read in this community somehow irregular (although there are some very busy readers like Peter Mueller). This has nothing to do with ignorance just with a lake of time. We cannot monitor a handful of platforms for important information and so important information like the one which you posted here gets somehow lost.

Therefore please post this information in a bug report, that it gets recognized. Posting the information in this community will not help to solve this problem.

Thanks in advance for your effort.

Maybe someday someone does the job?

Someone did the job, but after a short discussion about the icons there was no further reaction, so I just waited if this would come up again.

In the meantime I also changed some lang strings and the order in which the icons appear. 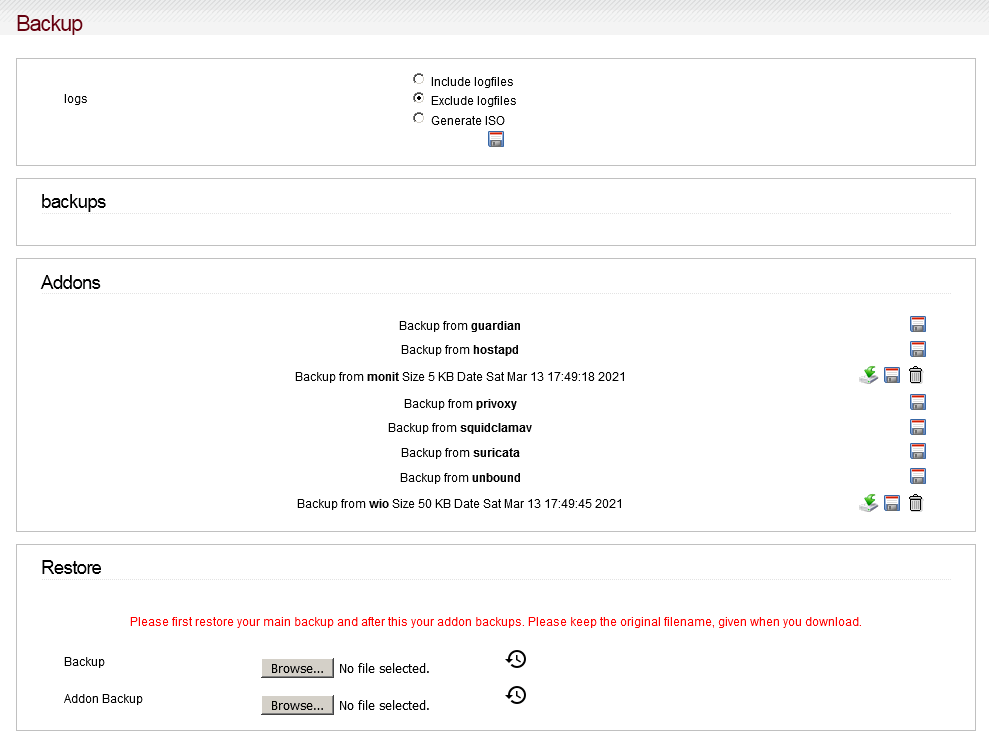 If there is still any interest in this, we could try again, no problem.

Okay, as it is going to be worked on then I won’t do anything further.

I like the change of icons! The old ones are definitely confusing to me. I do hover the icons to check but it would be great if it could be more intuitive via a better icon.

Is there a collection of “approved” icons used by IPFire over the years? Maybe there is a trashcan in there.

EDIT: I did find and existing trashcan! How about this (on your IPFire box)?
EDIT2: So maybe this for the download icons:

EDIT3: So maybe this for the download | delete | backup icons:

disclaimer: I am guessing it is OK to use these icons only because they were used in the past

definitely looking better than before.

Personally I would prefer to change the restore icon to something more unique because IMHO it looks too similar to the backup icon (floppy.gif <=> media-floppy.png). JM2C.

That’s why I looked for another icon at the time.
What about adding this?

EDIT:
I could have thought of that earlier: I’ll make some tests with a few buttons Michael once mentioned.

That way we could get rid of the icons…

Personally I would prefer to change the restore icon to something more unique because IMHO it looks too similar to the backup icon (floppy.gif <=> media-floppy.png). JM2C.

What about adding this?
Restore icon (License )
Opinions?

It looks great for a restore. My only concern about the icon would be its relationship to Giggle. Does anything get sent to Giggle when it is used?

Replying to my self once again:

Could somebody file a bug report for this problem or could we at least stop the discussion here and move it to the developing mailing list @mfischer and @jon ?

Just to explain better why this is important: it has happened some times that things get discussed here a patch was sent and the patch was rejected and things have to be started again. I am in fear that this might happen here the same way. People which needs to read this do not read here and so for example snippets like this

gets not the reply they might get on the dev mailing list. If this, for example, would be proposed as a patch I would vote against merging it because people with Color Blindless would not be able to get this logic.

What about adding this?
Restore icon (License )
Opinions?

There my reply would be:
I do not think that we should start picking icons from all over the internet. This will definitely get us into trouble (licence issues ). If new Icons are needed we should from my point of view look at something like: https://octicons-primer.vercel.app/octicons/ or https://icons.getbootstrap.com/

So thinks would look similar when we change a lot of icons.

A note at the end: please @jon and @mfischer do not take this as a critic on your person. These examples where just the first in this thread, where I could explain why it might be a better idea to discuss these topics on the dev mailing list :-). I just want to avoid that the discussion started here a result gets generated and on the dev mailing list, things get rejected or are discussed again.

PS.: I will stop monitoring this thread here and hope that we can continue in the bug tracker or at the dev mailing list.

=> 12588 – Backup: Rework and altering of functionalities and GUI for better usability

I hope I didn’t miss anything mentioned. If I should have forgotten something, please add.