I have the problem, that the DHCP Server on my ipfire box sometimes assigns wrong IP addresses to my clients.

I am using the DuoBox Business Appliance [1] from the TX-Team. The box has 2 NICs and an internal WiFi card (which I have disabled with the ipfire setup). The first NIC is used for the green network, the second NIC for the orange network and then I am using a USB<->ethernet dongle for the blue network. I haven’t configured any VLANs in Ipfire - so all native interfaces. I am using 3 Unifi Access Points which are connected to my managed switch and separated via port based VLANs from the green net.

Most of the time, everything works flawlessly. But every now and then some clients get the wrong IP address from the DHCP Server. Sometimes that happens more than once a day, and sometimes I have no problems for several days.

Here’s a screenshot from my DHCP configuration: 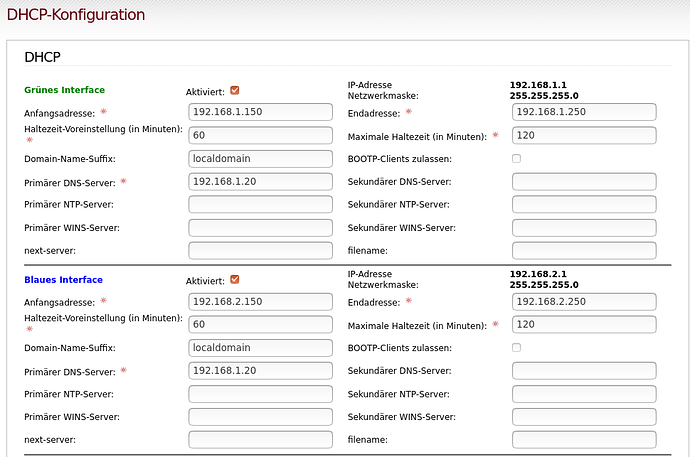 For most of the clients in my network, I have a static IP reservation configured - so I only have a handful of clients which get a dynamic IP.

Here’s a small snippet from the DHCP Server log file:

The strange thing is that 192.168.2.67, which is a wireless device, requesting an IP via the green network. Does anyone know what could be the reason for that?

Any tips on debugging the issue are highly appreciated!

Just curious: why did you configure the DNS server of blue equal to the IP address of the green network?

Is this a DNS server not running on the IPFire box itself?

looks like the vlan config in the switch is not correct. IPFire got the same dhcp request on both nics (green and blue) so i think green and blue are somwhere in the network connected together.

Thanks a lot for your help!

Is this a DNS server not running on the IPFire box itself?

yeah, right, the DNS Server is not running on the ipfire box directly, but on a machine within the green net. Via the firewall rules I’ve allowed to access DNS via the blue network.

looks like the vlan config in the switch is not correct. IPFire got the same dhcp request on both nics (green and blue) so i think green and blue are somwhere in the network connected together.

I’ve just checked again the config on my Netgear switch, but I can’t find anything wrong there.

Port 13 is connected with the IpFire USB <-> Ethernet Dongle.

I’ve rebooted the switch and updated the Firmware on the switch (just to be sure), but unfortunately it’s still happening.

Can anyone think of something else I could check?

(I vaguely remember, that I’ve played a bit with VLAN tagging ~1 year ago, but I dropped that again in favor of port based VLANs. At that point the GUI was missing the zone editor, so I’ve edited some config files manually. Could it be possible that there are some leftovers that are messing with my network?)

But there seems to be a different DHCP related error now. In my DHCP Server Log I get a lot of those messages:

The strange thing however is, that according to the webui there are no dynamic DHCP leases assigned. Also the start address for dynamic DHCP leases on the green interface is 192.168.1.150 (see screenshot in first post). Does anybody know what’s going on here?

edit: I also updated Ipfire to the latest build yesterday…not sure if this is related?

The DHCP server log message seems to me to possibly be indicating a mismatch between what you have on the WUI screen and what is in the dhcpd.conf and possibly what is still in the leases file.

If you don’t find any differences between what is in the WUI and what is in the dhcpd.conf and dhcpd.leases files then I have no idea what is causing the message.

If you find a mismatch between any of your fixed leases between what is on the WUI and what is in dhcpd.conf then disabling that fixed lease removes it from the conf file and re-enabling it recreates it.

Then we can wait and see if the error message returns. Hopefully not.

I run with VLAN tagging as you describe and I have no messages like yours in my logs with either Core Update 153 or 154 so if the messages return after the above steps we will need to have a further think.

Thanks a lot for your help @bonnietwin

I’ve just checked the two files you mentioned and everything seems to be okay. The IP 192.168.1.20 is correctly set in the /var/ipfire/dhcp/dhcpd.conf file, but is missing in the dhcpd.leases file. So to me it seems that the WebUI and the files on the filesystem are in sync.

When the DHCP issue appeared, I rebooted Ipfire. Since then, everything is working fine and the logs are looking good. Not really sure what has caused this, but it seems to be gone again - at least for now.

I’ll monitor the log files in case the issue appears again. Thanks for your help!

Glad everything looks to be working properly after the reboot.

Good luck with the tagged VLANs.