I recently set up a new filewall with IPFire, but sometimes hosts that pull a DHCP address don’t get propagated into the DNS server properly. When this happens, if I log into the firewall and do this:

…then the host will show up in DNS.

My suspicion is that whatever mechanism that the unbound-dhcp-leases-bridge process uses to tell when it should regenerate the table is not working reliably. What can I do to help troubleshoot this?

Jeff, I dont have an answer but experience the same issue. I bring a laptop into the Green network, DHCP server shows its mac and ip but the bridge does not notify unbound. My solution is what you typed, restart dhcp and then I can resolve the host. My Perl skills are not good to troubleshoot the code. Hopefully, a skilled person could take a look.

I’ve been seeing the same thing. I’ve been trying to figure out the process for the dhcp server & leases and how they interact with unbound but it is over my head!

I’ve been monitoring the files below and I can see changes in /var/state/dhcp/dhcpd.leases (like when you bring your laptop into the green network). But there is no corresponding entry in /etc/unbound/dhcp-leases.conf. Weird, eh?


And I think that is created by unbound-dhcp-leases-bridge. But this is beyond me.

I don’t know if this is a bug or me not understanding how things work!

EDIT: I decided to add a bug report:
https://bugzilla.ipfire.org/show_bug.cgi?id=12694

I have had a look at this bug and am trying to reproduce it and struggling a bit.

If I have a fixed IP address for a specific mac address and have the hostname defined in the IPFire Hosts page then whenever that computer joins the network I can always resolve the hostname to the IP address.

However it seems that you are talking about a computer getting a dhcp IP address so nothing can be put in the IPFire Hosts page as the IP address for that hostname could be different the next time it connects.

If I connect with a vm computer onto my vm IPFire I get a new IP Address provided by dhcp but I can not resolve the hostname that the computer has at all, even when I restart dhcp because that hostname is only specified in that computers /etc/hostname file and no where in IPFire.

Could you specify in more detail the steps you are taking and what you expect to find in which file by what command and what you are actually getting.
That might help me understand how to duplicate what you are doing.

@bonnietwin I logged on to ipfire and tail -f /var/log/messages Then I switched on my laptop. As you see, the MAC is discovered. Within parentheses, the hostname of that laptop. So now DHCP server knows ip, mac, and hostname.

It’s the job of the bridge (which runs as a daemon) to notify unbound. Trying to ping laptop, unbound not a clue. Then, I run my little script to restart DHCP and laptop is pingable.

Thanks. That helps. I will follow the same steps and see if I get the same result.

Your script restarts both dhcp and unbound. What commands do you use in your script for that so I can make sure I am duplicating what you do.

This might help (and it took me a little while to figure out!)

If you add a -vv to unbound-dhcp-leases-bridge and then run /etc/init.d/dhcp restart it will add lots of info into the dhcp logs. 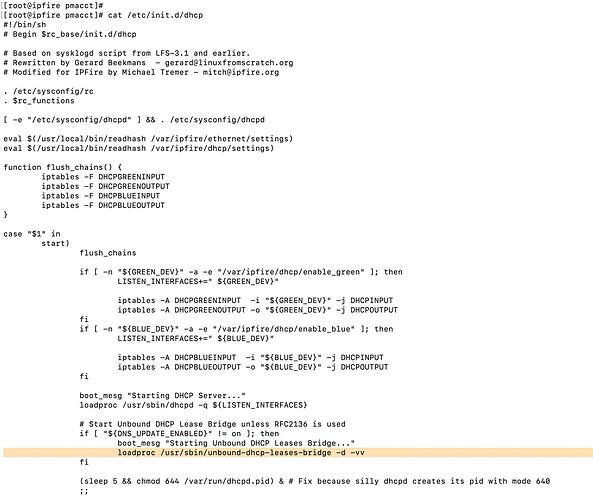 my hostname and hosts file on the computer on blue are as follows:-

How does this compare to yours.

What options do you have in your dhcp client on your laptop. Maybe I am missing something that sends the hostname to the server.

I will check my dhcpcd.conf for my client on the blue vm computer.

OK, I solved the problem of the missing hostname. My dhcpcd.conf file on my blue vm computer had the hostname line commented out.
I uncommented it restarted my dhcpcd client and IPFire now gets the blue3 hostname in brackets.

I will now follow the following steps you both took and see if I can now reproduce what you experience.

@jon I will definitely add in the double verbose. That will help a lot with the detail of what occurs.

Will let you know if I am successful in reproducing it.

In my dhcp log the only time I see local IP addresses in parens ( ) is for my blue network gateway (I think that is the right word!)

My laptop is Linux Mint 20.2, stock, basic install nothing custom.

for me these are braces. I was taught to remember the dentist adds { } to your teeth to get them straightened. (yes - this is true!)

Consistency in naming of things.

Anyway, I solved the hostname in parentheses bit. Modified my dhcpcd.conf file to uncomment hostname

@jon if you don’t have a hostname on the computer you are trying to get a dhcp IP address for, then what would be put into the DNS to be able to resolve to the IP Address.
I thought the problem was that you had a hostname but the DNS in IPFire was not resolving this to the IP Address that dhcp had given it.

if you don’t have a hostname on the computer

Sorry for the confusion: Found the hostname in a different location on a Mac:

Note that it doesn’t happen every time.

It looks like the bridge process uses inotify to watch for changes to the lease file, and that works fine sometimes, but it seems like other times it misses noticing that the file has changed. I haven’t been able to catch it in the act though to see why this happens.

Thank you! This was one of the pieces I completely missed!

Ah, that could make it challenging to figure out what is going wrong and be able to fix it.

So I followed Paul’s steps and had my blue3 hostname in parentheses in the log details.

I tried pinging blue3 and it could not be resolved.

I then stopped dhcp and started dhcp. The dhcp start also ran the bridge. After this step (so no restart of unbound) I ran ping on blue3 and it was correctly resolved.

So this confirms what Jeffrey has indicated, that this is going to be a problem that is not consistent in its occurrence.

It seems to me if the lease runs out (expires) we will run into the same issue.

And It could be the combination of things: the lease expires AND the /etc/unbound/dhcp-leases.conf updates and unbound updates.