all my hosts have been on GREEN so far. Today I started to split them between BLUE and GREEN and assigning fixed IP adresses.

Here is the behavior that startles me: Many of devices show up in both, fixed and dynamic leases. Some of them show up twice under dynamic lease, the first time without MAC address. See example of one device highlightd in the screenshot below. They can be pinged via their latest dynamically assigned address.

Setup: ipfire 152 with APU4D2. BLUE and GREEN are both wired networks via unmanaged switches connected. Since the wiki page on DHCP states as expected:

All clients not listed in this section will be given an address from the ‘dynamic’ range set above.

What would be a reasonable explanation?
What should be my next course of action?
Restart ipfire, too? That does not seem the way it is supposed to work. 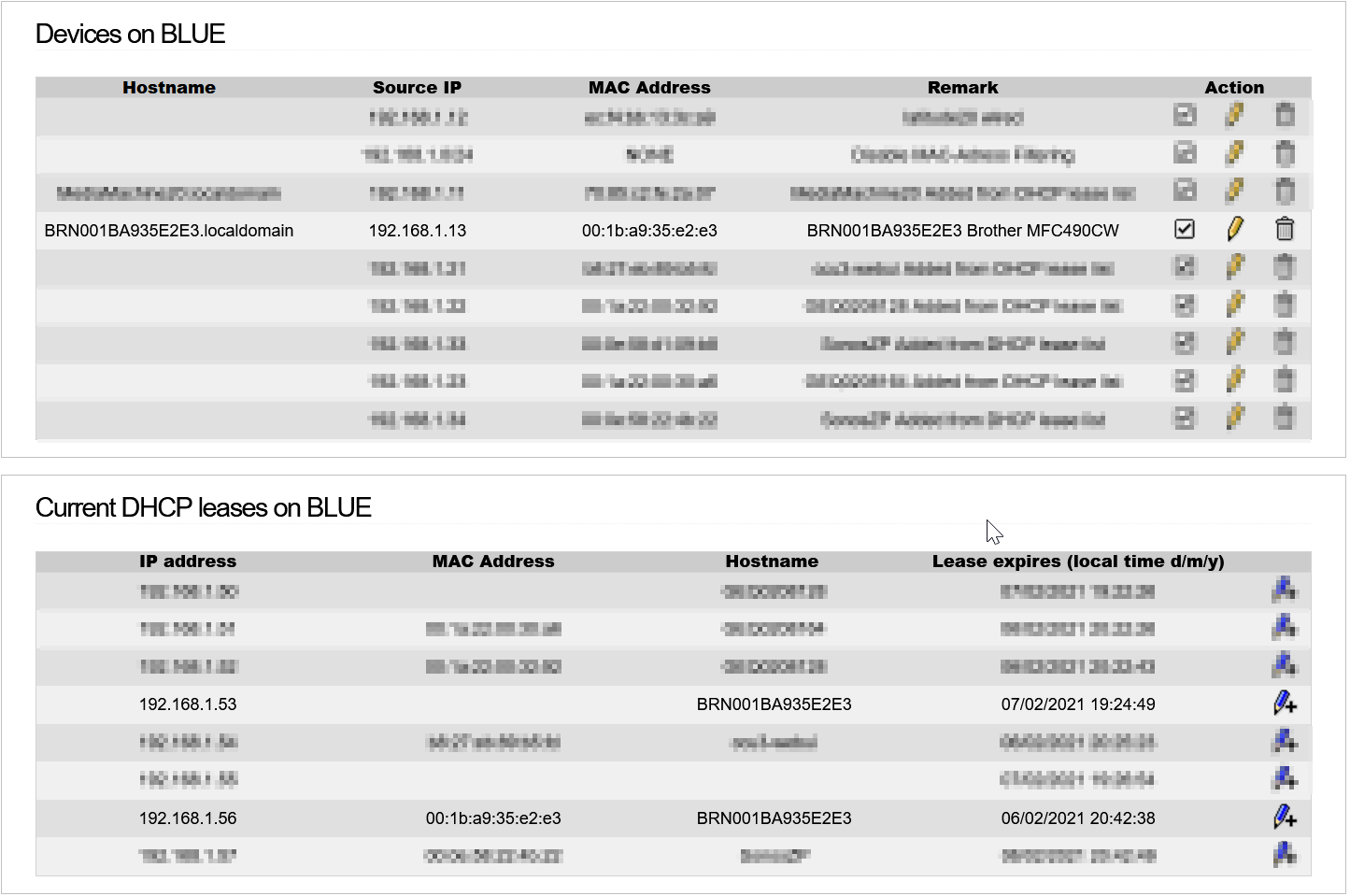 Why there are dynamic leases without MAC is curious. This shouldn’t happen.
Could you provide the leases information files? Maybe the WUI display contains an error for certain configurations.

Thanks @bbitsch. Check, that was the procedure I was going through.

But dhcpcd first looks at the fixed leases definitions, thus the dynamic leases information is irrelevant.

That was my expectation, which is why I was surprised to see new dynamic leases. I can live with the duplicate entries, entries without MAC and the fact that ipfire assigns the dynamic rather than the fixed addresses are the puzzlers. From a recent backup, the file:

/var/ipfire/dhcp/fixleases contains all entries of my GREEN network. None for BLUE.
/var/ipfire/dhcp/dhcpd.conf contains subnet definitions for GREEN and BLUE plus entries for fixed leases on GREEN.

Entries for fixed leases on BLUE I could not find any of the files. Where should I look next?

I’d rather share the config files on a more private basis - not in the open forum.

Are the fixed leases on BLUE shown in the WUI?

Yes, they are showing in the WUI as shown in the screenshot. History of browser deletes with every shutdown, so the information is fresh and not from cache. Clearing one hour of cache in the browser and reloading the WUI rendered the same result.

Logfiles downloaded from the WUI:

The logfile reports DHCPREQUEST and DHCPACK messages from all devices that are online and using DHCP, about every hour. For example:

There are three additional messages every hour:

NB: IP addresses on two devices from an automation system are hard coded, which fixed communications problems they seem to be having. This does not appear to be related, though.

Where does ipfire store fixed and dynamic leases on blue?

/var/ipfire/dhcp/dhcpd.conf contains subnet definitions for GREEN and BLUE plus entries for fixed leases on GREEN.

Entries for fixed leases on BLUE I could not find any of the files. Where should I look next?

All fixed leases are written into /var/ipfire/dhcp/dhcp.conf
If you have a dynamic section but no fixed leases in the conf file then it is likely that you have fixed leases for the Blue subnet defined in the Current Fixed Leases section that are not enabled.

/var/ipfire/dhcp/fixleases contains all entries of my GREEN network. None for BLUE.

I just noticed that you say that you have no entries for Blue in the fixleases file. That file should contain all the leases entered into the Current Fixed Leases table, whether they are enabled or not. If enabled then the third entry in the line is “on”. If disabled then the entry can be either “off” or “”.

Can you provide a screenshot of the Current Fixed Leases table.

Hi @bonnietwin the screenshot at the top is from my WUI, is this what you are looking for. I think I found the strange behavior: I had added the “fixed lease” entries from WUI: Firewall >> Blue Access.

After adding the same device via the WUI in: Network >> DHCP, the fixed leases show up in both files:

Might this be an unwanted, undocumented feature (bug)? I still need to check tonight that this edit caused the desired effect of fixing IP addresses and will report results. If yes, should I file a bug report?

I really appreciate the help from the team.

Do you mean the section ’ Current DHCP leases on BLUE’ of the page?
There isn’t differtiated between fixed and dynamic leases. This table just shows all known leases ( fixed and active dynamic leases ) for adding them to the set of allowed wireless devices. Editing allows to do that with or without MAC filtering.

The screenshots from the top of the thread are titled Devices on Blue and Current DHCP leases on Blue. These are entries on the Firewall → Blue Access menu.

No you don’t have a bug there.

When you add a device in the Firewall → Blue Access page then you are permitting it’s mac address to be recognised. It makes no difference in this table if the client has a fixed lease or a dynamic lease.

You can also decide whether you want to check for the mac addresses for all your wireless clients or not.

Thanks for the clarification. I missunderstood the entries. Case closed.