I thoroughly screwed up (related to my capabilities) and would be glad if I could get some support on the below:

otherwise I could not identify any rules or chains from iptables that would have an indication to the specific device or the IPFire host.

If I remember correctly, that rule looked like the following in WUI (but i might be wrong here):

So here I am now, asking kindly and hoping for your support or guidance on how I best could remove this stupid rule that forwards my former WUI query to a different IP (respectively masks the reply with a different IP) so that I can no longer reach it, other than by console.

Thanks in advance for your replies, and let me know what additional information would be required to give recommendations.

If you have access via Putty, you can try using elinks.
After connecting, type elinks in SSH console.
Then you can log in

After logging in, you can go to Firewall Rules and try to fix what you broke. 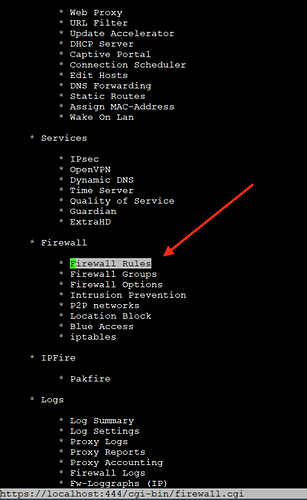 Edit
Maybe you just need to remove the bad rule. 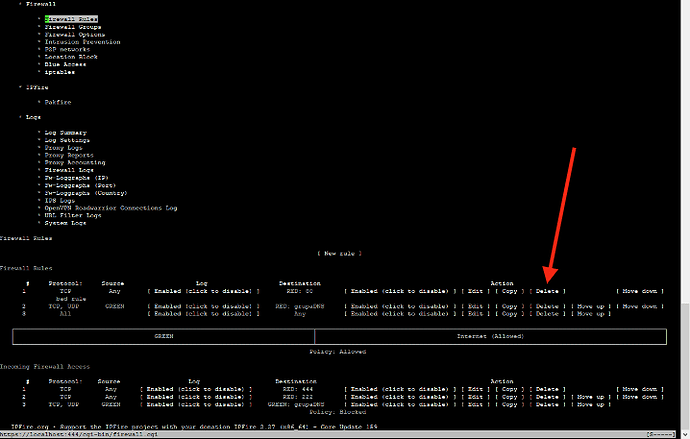 After deleting the rule, be sure to Apply changes

Edit2
A little hint. When you press F9, the elinks menu shows up. 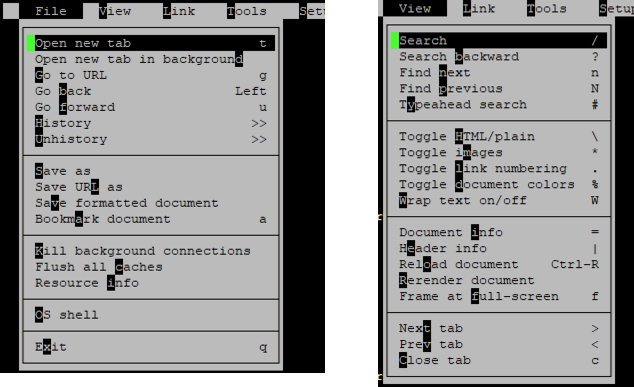 edit3
" elinks, the text-based browser is also no longer an add-on any more, but shipped with the core system."

The first exciting big update of the year is ready: IPFire 2.25 - Core Update 141! It comes with a totally reworked DNS system which adds many new features like DNS-over-TLS.

thanks for that detailed reply, i was looking into it already and possibly fail already in installing elinks:

b) in IPFire documentation I found this page https://wiki.ipfire.org/devel/ipfire-2-x/addon-howto which suggests that this process is exceeding my current abilities (though I’m open for learning)

Ideally i could call for the old packfire package - but I am not sure how I could do this?
Second option would be to “fix” the error for packfire upgrade - would you have suggestions here how to overcome?

Your problem with upgrading is likely to be because your current version is Core Update 128 which is 2.5 years old. IPFire is currently on Core Update 159. There have been many changes in that time period, some of which may give problems with trying to upgrade with such a large jump.

TIME ERROR: Unable to get the nettime, this may lead to the verification error.

Maybe check if the time of your IPFire is correct. This message is suggesting it couldn’t get the time from your IPFire and that is why ther verification failed.

EDIT:
I found this message in the forum which might be suggesting that the verification failure could be because of lack of memory.
https://community.ipfire.org/t/download-error-to-core-159-nettime/6136/2

elinks was moved from being an addon to being a part of the core4 distribution in Core Update 141 so that is why you can’t find it any more as an addon.

You could look at doing a new install and then doing a restore from your backups but even with that there might be differences in what is stored in the backup from so long ago with what the packages expect to get now.

I think your two best options are

I note that you have the i586 version. In case you are not aware, the End Of Life for the i586 version has been defined for end of 2021. After that there will be no Core Updates for i586.

So if your Alix is 64 bit compatible then you should really upgrade to the 64 bit IPFire version.
If your Alix is physically 32 bit then you need to be thinking about getting some new hardware. The two blog articles give the background for why you should be looking to do this.

thanks as well to you for your detailed reply!

The hint to the memory was a good one

- i remember experiencing this issue in the past every now and then. So I managed to overcome it by killing Guardian on my IPFire from the console, which I know is a huge memory consumer and doesn’t harm until next reboot. With this i managed to get a step closer to my target

Will keep you updated.

Glad to hear you are making progress.

That you will be successful.

If access to WUI is blocked, after insert some rule in WUI --> Firewall Rules,
and you cannot start or install elinks, at the same time,
but you have access to SSH console

then, (for emergency restore access to WUI from GREEN network) you can try some solution:

If I’m wrong, someone please correct me.

so so many thanks

I managed to reach core 141 and deactivate the rule via elinks, and what should I say. I have back the access to the WUI

For reference, this is what the rule looks like: 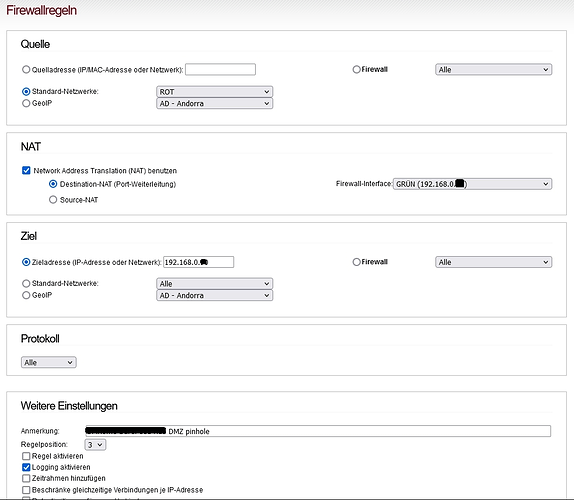 Let this be a warning to all users, how to NOT configure a firewall rule

Thanks once more and stay safe
Manny