I have ipfire lan on 10.0.0.1, but I have a separate ddwrt router at 10.0.0.2 that runs dhcp on 192.168.1.1 for different traffic. I’ve tried creating a static route which should be pretty straight forward, but I’m getting nothing. I also tried adding a firewall rule in combination and independently…just in case. I’d really appreciate a point in the right direction.

I think you would have to define this route in Advanced Routing in ddwrt.

I had the ddwrt set up and working correctly under a tplink gateway and didn’t change anything on the ddwrt when I swapped the tplink to ipfire. But I just added the static route to the ddwrt and still nothing.

Is a firewall rule required in addition to the static route? Just trying to narrow down my troubleshooting.

I don’t know if this article may help you, see last example … 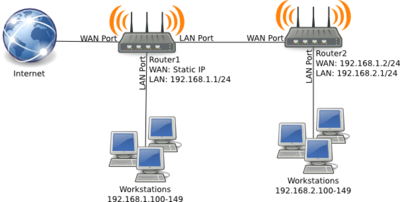 This week I configured a network with two routers and multiple subnets using DD-WRT. This article explains how I did it. This following graphics re...

Thanks, and that is how I have ddwrt set up. Like I said, the ddwrt side is fine…was working before moving over to ipfire. I just have a problem with ipfire not allowing the ddwrt subnet to communicate with its own subnet.