Enlarge boot partition during or after installation

I use IPFire on an APU1D4 and have received a message since some core updates that the boot partition only has 9% free space. With the update to Core 142, the memory was reduced to 0%, so I set up IPFire again and changed from the i586 version to the x86_64 version.

When I see some of the other threads, the problem is not new and occurs in various forms, from individual partitions to the entire hard drive.

After I wanted to switch from i586 to x86_64 anyway and use the entire hard disk space, the reinstallation was inevitable this time. I would like to build for the future.

After installation, the partitions should only be changed via a second live system, e.g. GParted may be possible. Has anyone ever tried this successfully or are there stumbling blocks for “sometime linux user”?

Thanks for your support.
Best regards
Sören

WLAN takes neglibible space on boot partition, so the default 124 MB in new installation should be fine.

There is no way to change the size of any partition during install from pre-compiled IPFire.

If you really want to fiddle, then GParted works reliably enough, but would have to move the / partition, which can take a long time and be more risk.

Thank you for your answer.

When installing it in December 2016, I also thought that it would be enough, just 3.5 years later I had to find out that 100MB /boot are not enough.

110MB was used for /boot during the new installation. Where do the 124MB come from?

Status > Media from GUI appears to be reporting MiB (121 M on i586). Free space should still be quite adequate.

Normal even the i586 installtion with additional PAE kernel should still fit on the old layout with 64MB bootpartition.
If you run out of space and use a xfs partition create /.forcefsck and reboot to run a filesystem check. 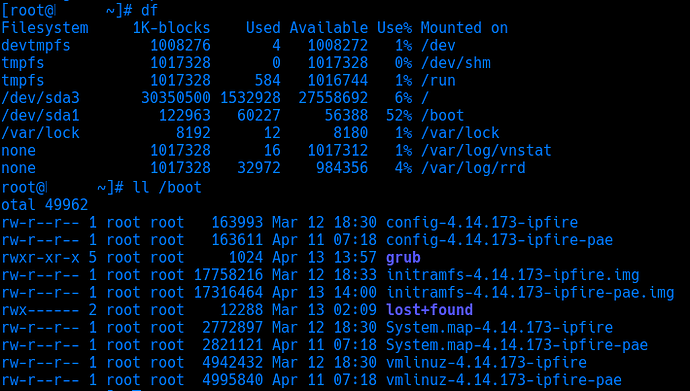 I anticipate that a new, non-PAE kernel would be added during some core upgrades, before either of the existing kernel are removed, which would certainly run out of disk space.

I anticipate that a new, non-PAE kernel would be added during some core upgrades, before either of the existing kernel are removed, which would certainly run out of disk space.

A core update always remove all kernel files before installing. I still have the 64MB layout on my i586 backup machine and it works yet.

And if there is not enough space it will not install the pae kernel.
If you get a warning that this fails you should resize the partition with a livelinux and gparted.

The core of my question is actually answered.
Nevertheless, I find it interesting that there are different memory layouts. 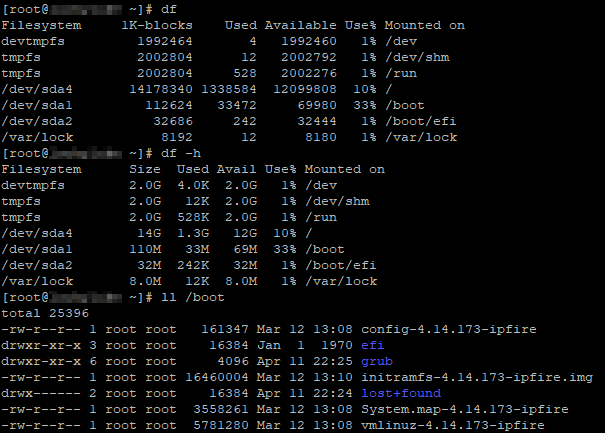 The layout has changed from time to time. The first IPFire installations had only 20MB bootpartitions. But keep in mind that IPFire 2.1 was released on 8. Nov 2007.