I set topology subnet in settings.conf.local and it is being put into server.conf.

However when I create static IP blocks (10.0.1.0/24 for example) it is still insisting on using net30 topology. And when I connect it fails with an error. I have to use the DHCP pool to let it assign an address, it seems I cannot assign static IP address pool when using topology subnet.

Am I doing something wrong? 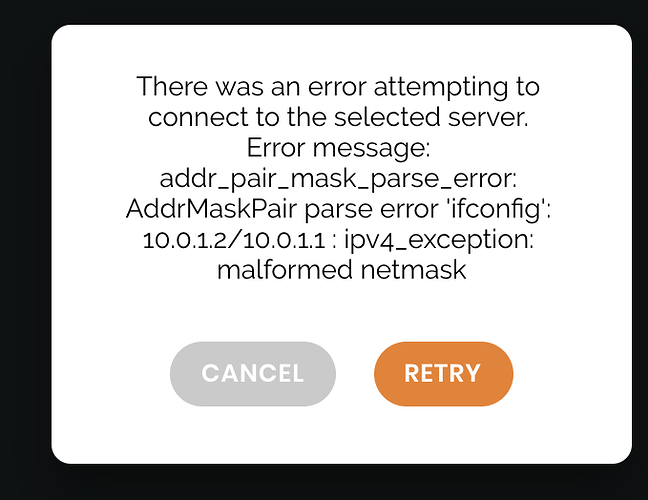 I suspect that you are not doing something wrong.

net30 topology is structurally built into the ovpnmain.cgi code. You can’t just change the topology by statements in the conf file. The error says that it is looking for an Address pair (10.0.1.2/10.0.1.1) which is the net30 topology I believe but if you have changed the topology it will not find those.

It would be good if just changing the conf files was sufficient as the net30 topology has been deprecated and so ovpnmain.cgi needs to be modified to deal with that but it is not easy as any change needs to migrate people from net30 topology without breaking any of their existing connections. The change mustn’t require people to recreate all of their OpenVPN connections. It also has to be applied to both Road Warrior and Net to Net approaches as well.

That change is definitely beyond my capabilities.

Ok I suspected that might be the case. I’m happy to alter it through SSH if I know what file to alter.

I think I have found it in the ccd folder, I am testing now.

Hmm did not work

That was the ticket

In saying that, whilst it fixes the IP allocation to the client, I think it is not assigning the routes correctly still.

I wish, there were a way to ask the original poster, whether he successfully fixed his issue, after all…

The original poster has moved on to other projects and asked that we delete his/her account.

Feel free to begin a new thread with your issues and pictures. Hopefully someone will be able to assist!